A personal story by Jan, a polio survivor living in Queensland.

“I feel in general, many polio survivors tend to have the attitude that if something works for you, don’t change it. Each time we were provided with new equipment it became a learning curve all over again and understandably by the time we became accustomed to a new way of walking or using our upper limbs yet again, the thought was, “well that’s good, let’s stay with it”. Such was my case, however, having used the same orthotic for 43 years, and now in my 60’s , I wondered if maybe, just maybe, with advancements in technology, there might be something better.

To this end, in April, my husband Ray, and I met with Darren Pereira and his team at Neuro Muscular Orthotics in Clayton, Victoria to discuss whether there may be something they could offer me that might be more beneficial to my mobility than the below knee orthotic custom made for me at the Royal Children’s Hospital, Melbourne in 1976. During almost 2 hours with Darren he explained what they could offer me, how it would work, and what I would need to do to make it work. With the decision made to proceed, a cast of my right lower leg was made there and then.

We returned 5 days later to collect my new carbon fibre orthotic (very different in all ways to the old one). Following fitting, and adjustments to suit my personal requirements we headed for home in Qld, with a recommendation from Darren that I would benefit from input from a neuro exercise physiologist to assist me in becoming accustomed to walking with my new “leg”.

To say that there was a massive difference between the old and the new would be an understatement.

I was advised to initially use the new orthotic for a few hours at a time to become accustomed to it. No – me being me – I decided to wear it all day – hence by day 5 I could barely walk as my gait had changed and my lower back was suffering. Alas, if all else fails, go back to doing what you are told to do. Hence, my back recovered and over a two week period I built up to wearing it all day. At this point I also began seeing an exercise physiologist, as suggested.

My fatigue levels have greatly reduced and I believe this in part is due to the fact that now my right leg is doing a lot more of the work it has taken some of the hard work off my stronger left leg, which has for my lifetime with Polio, done the bulk of the hard work.

I’ve been using my new leg for just on 3 months now and have to say that I am both pleased and excited with the difference it is making. My walking is still a work in progress, but most noticeably, I have gradually been able to get around known areas (ie at home) with just one stick rather than 2 and negotiate steps and slopes far easier. 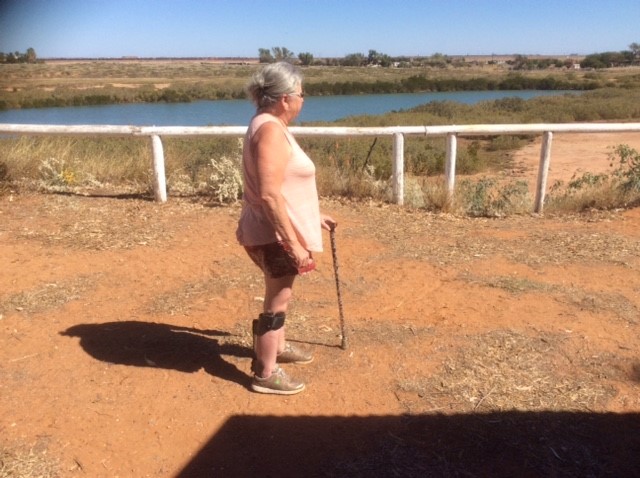